Hi, Sprinter Van Man, I’ve tested few code readers incl. Carsoft MI8, iCarsoft MBII, Autel AP200. Just brief mention the Autel AP200 is a really nice unit, that’s about our favorite right now.  iCarsoft MBII has been a longtime favorite of many people in the forums and groups. And one computer used to be the original carsoft 8.0, it was the original one that worked with T1N Sprinter, cost a few thousand dollars back in 2007 came with all this pinky stuff to hook it up.

Let’s look at how Autel AP200 Bluetooth OBD2 scanner works. We didn’t start the Sprinter Van for several days, so we’ve got several engine lights on for nothing more than a low battery start, hook up and clear some codes.

We put a chain on that, so we don’t forget it, too many times we have left Autel AP200 in a car and drove away or even just closed the car up for the night, woke up in the morning to find a dead battery, so we put a leash on it so it’s very visible and not forgotten. 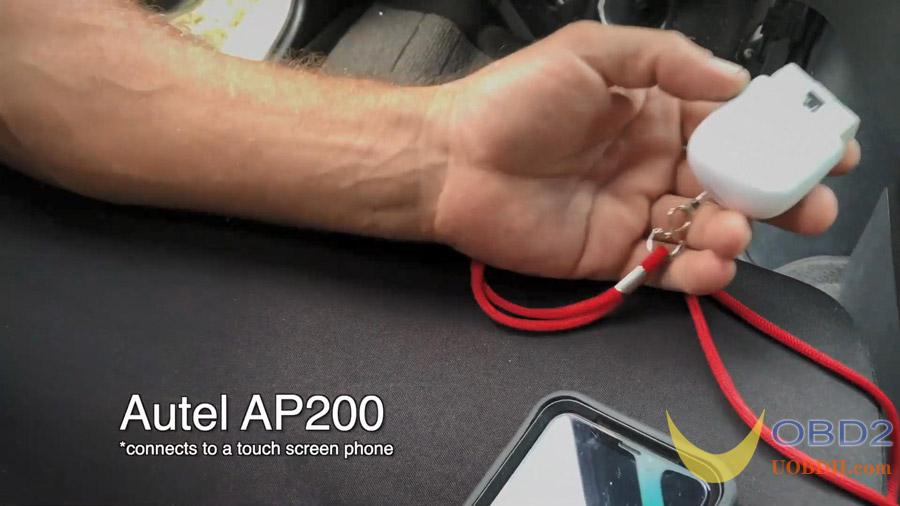 Now with that plugged into the OBD2 port of Sprinter, turn the key on and it’s already been synced to my phone and turn my Bluetooth on AP number here. Allow Autel MaxiAP200 to communicate with the VCI. 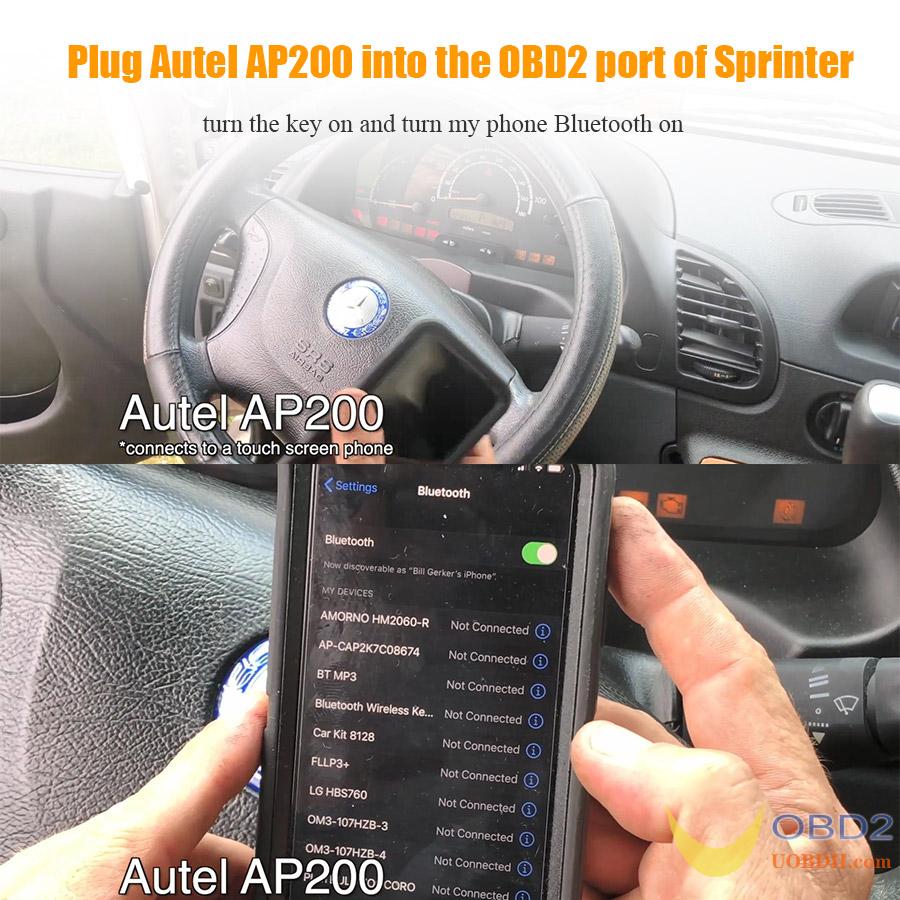 It’s “Sprinter”, we’re gonna go with the YD…WD…Because this VAN is a WB so we’re going with the WD.

We’re in the USA. 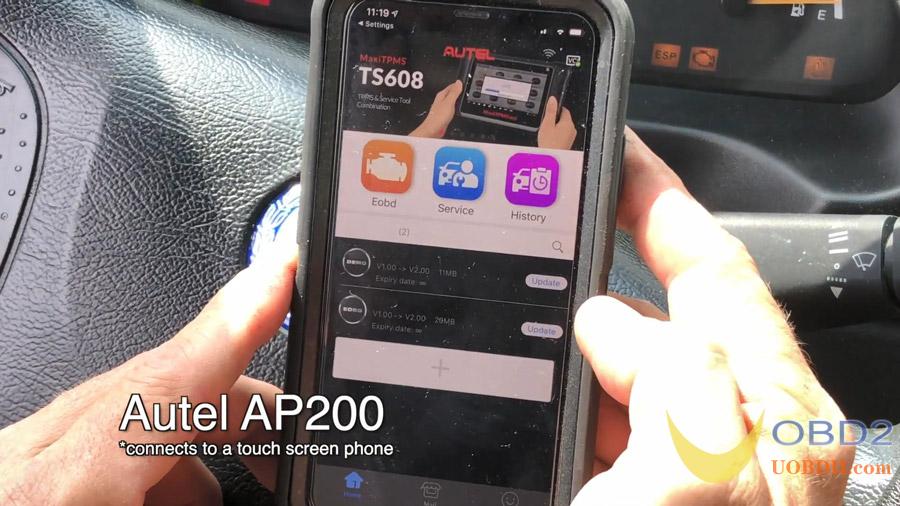 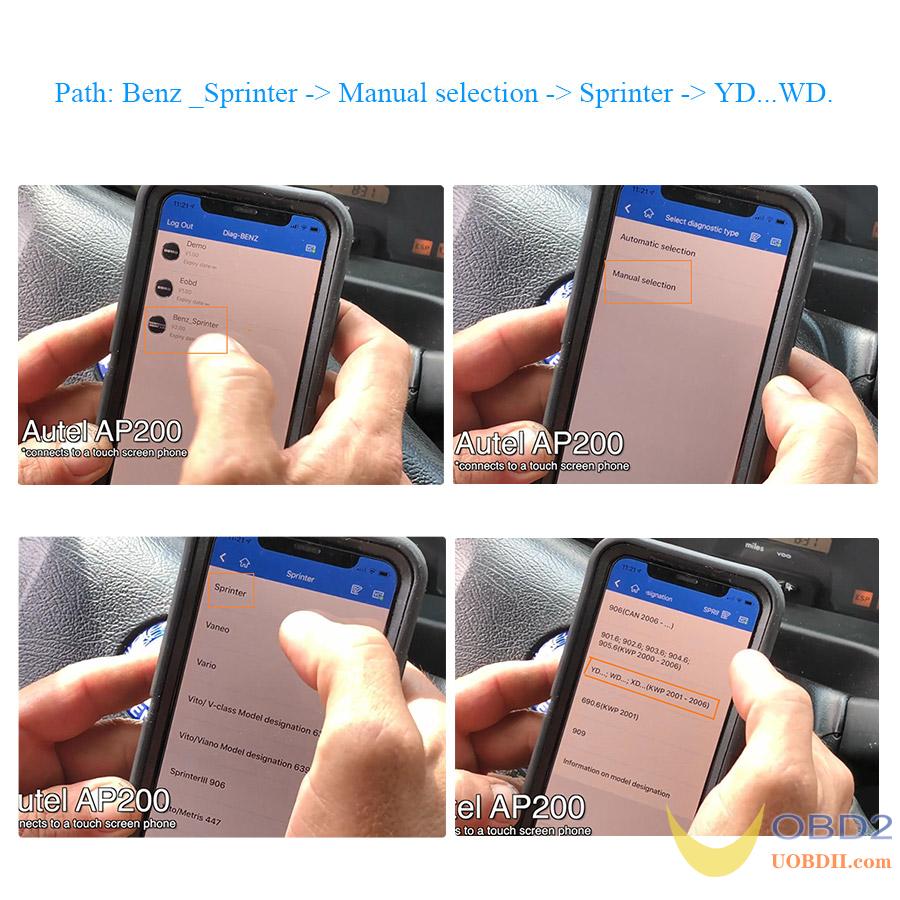 And we want to the “control units“ not to scan them all. Then “Engine control module“. 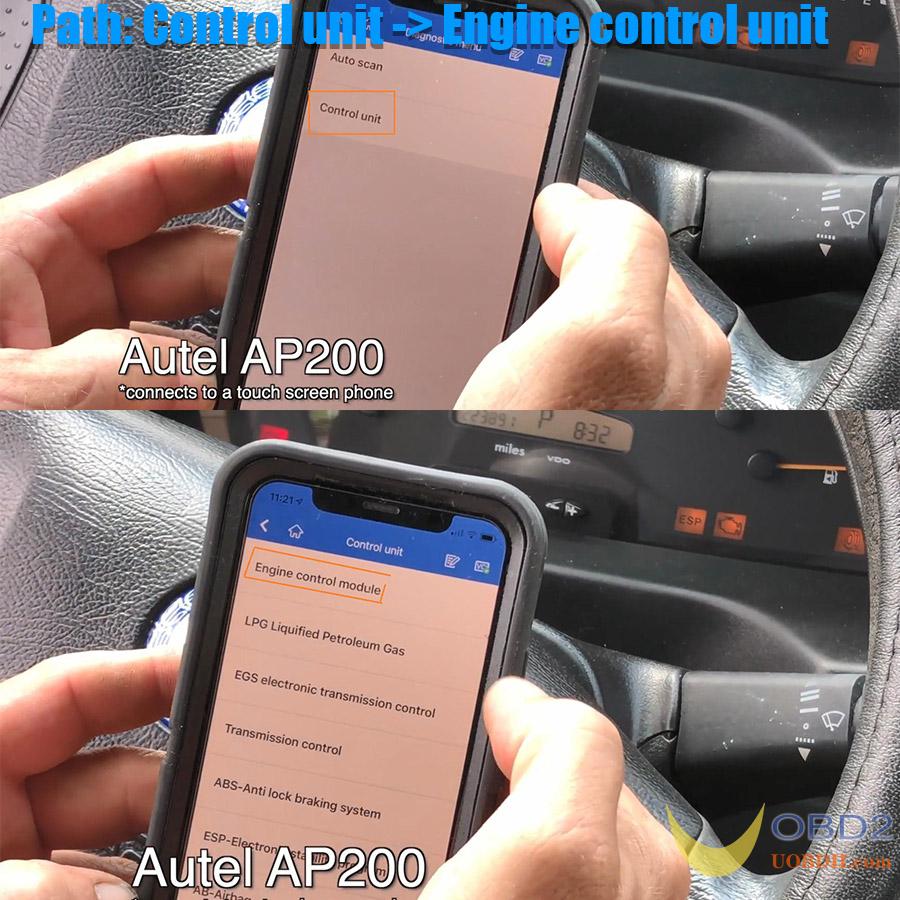 Key on and engine off.

DTC 2045-1: crankshaft sensor. This one is indicated and Mill on that means that’s lighting the check engine light. 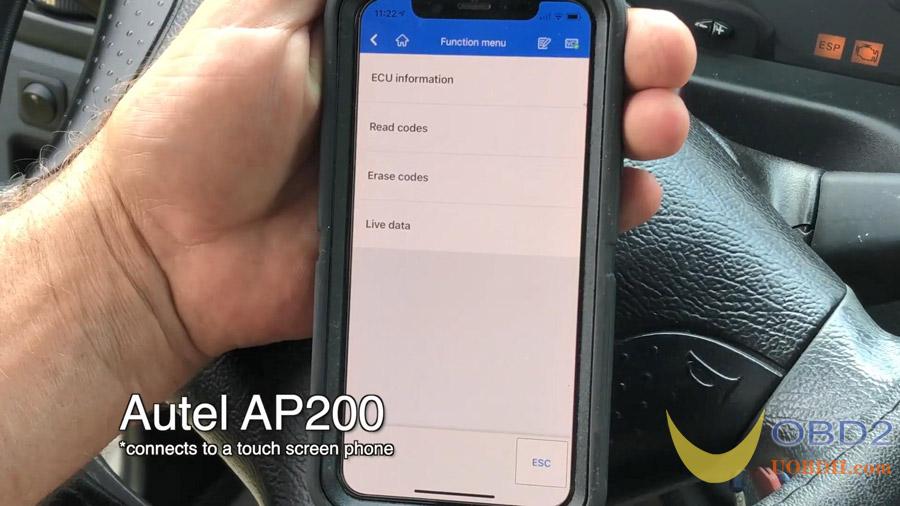 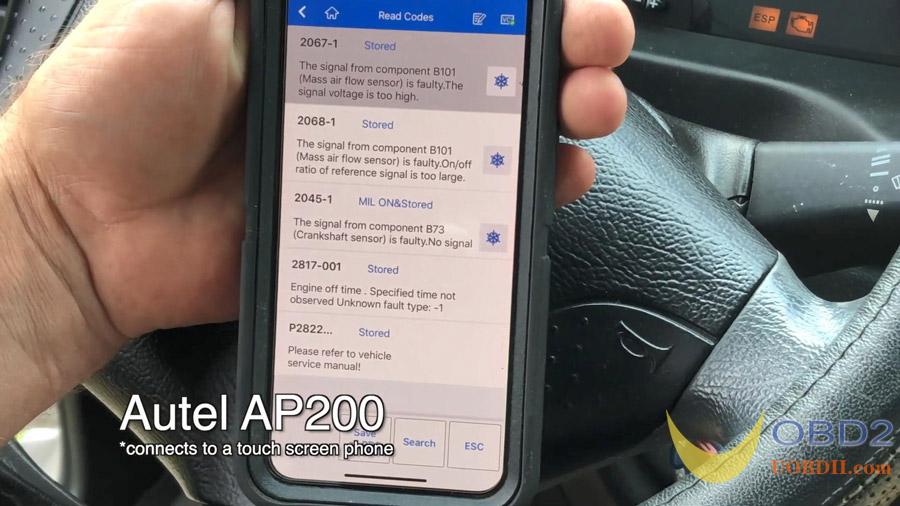 Oh engine speed zero so that the engine was off one.

That code was tripped, and it saves some other parameters to down here with it.

Yeah, it’s like old dead battery stuff to me. Then engine speed was there.

And battery voltage is 10V. 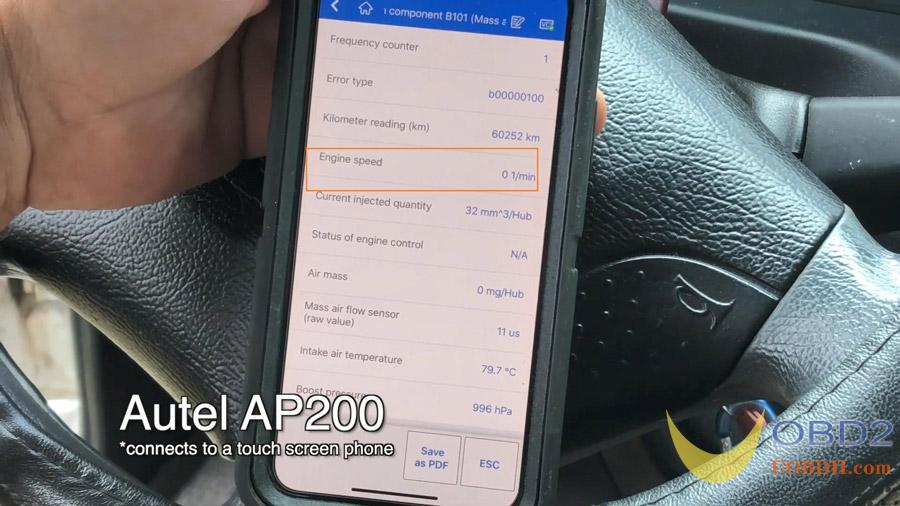 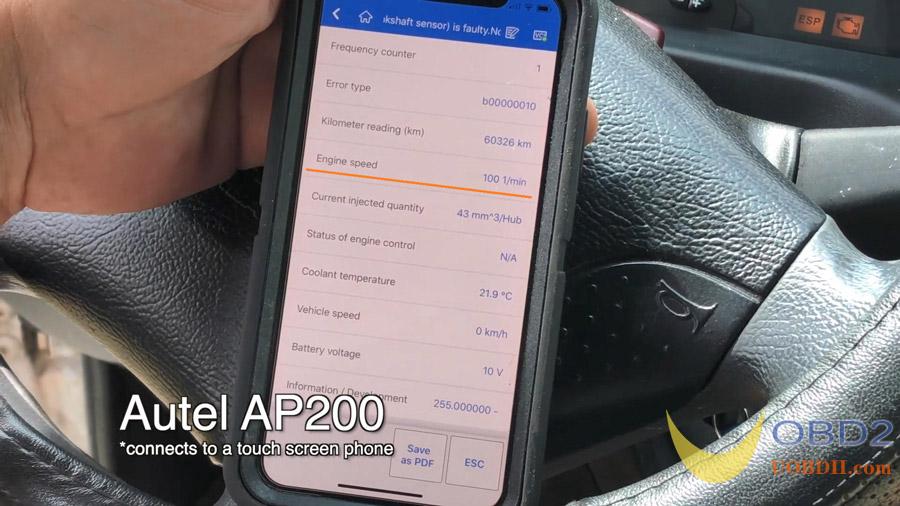 Let’s go back and look to others. yeah only one “okay”. I think we can erase those codes without much worry.

How about the live data.

Okay, select “Engine control module”, I assure it’s Bluetooth that makes it so slow, it also might be slow because it’s trying a lot of different things. 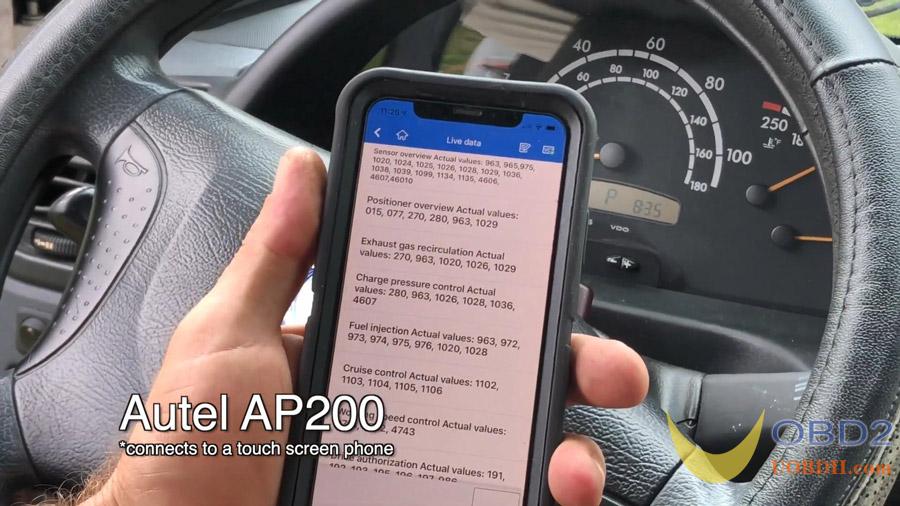 Quite a few different categories.

You know on the other meter we looked at sensors and EGR, so let’s look at the similar sensor overview.

Scroll down to see a couple more.

A little bit slower to update, that might be because of Bluetooth because it’s reading so many variables at once. 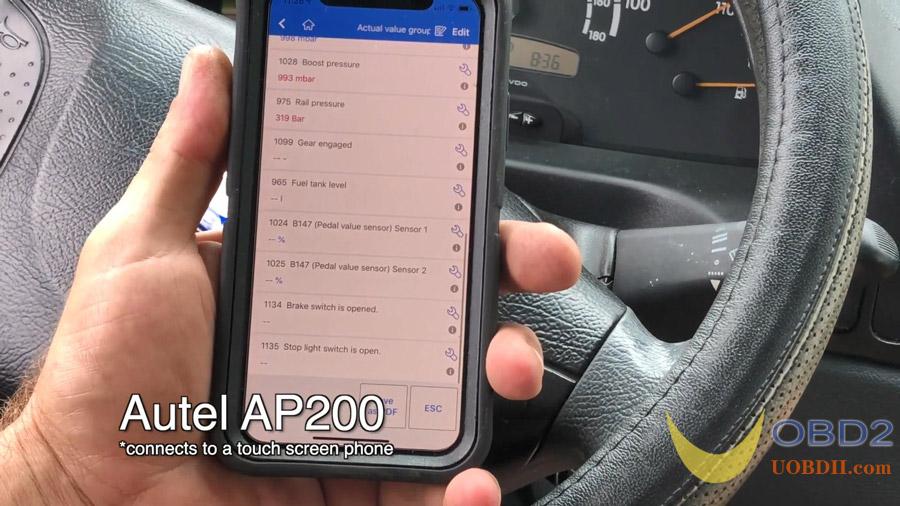 Each one eating up some refresh rate I believe and this one you can turn things on and off too, and you can also set some of them to show as grass.

Let’s dive into that deeper on just this meter, this one (Autel AP200) gives you definition code, that’s pretty nice. 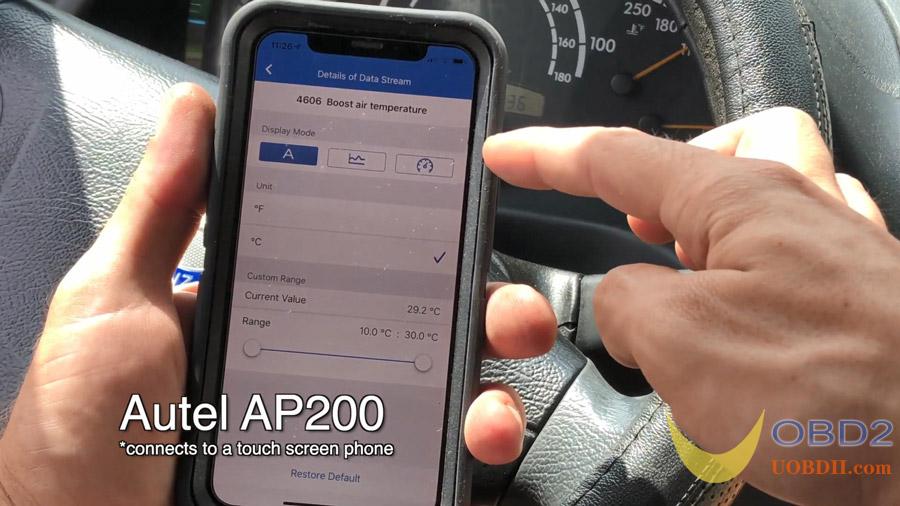 Let’s step on the pedal now and then step off the paddle. Alright, so let’s look at a EGR value just for fun.

Air mass is always read on all of our fans don’t know why. 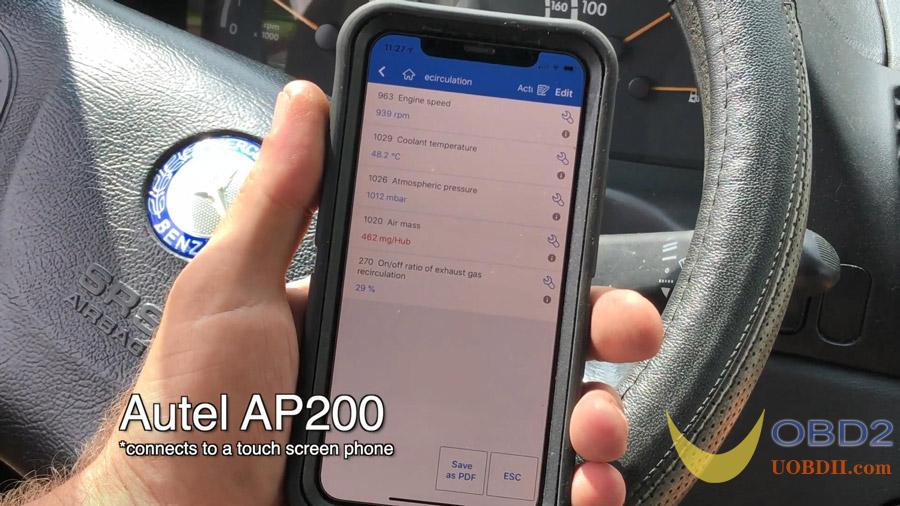 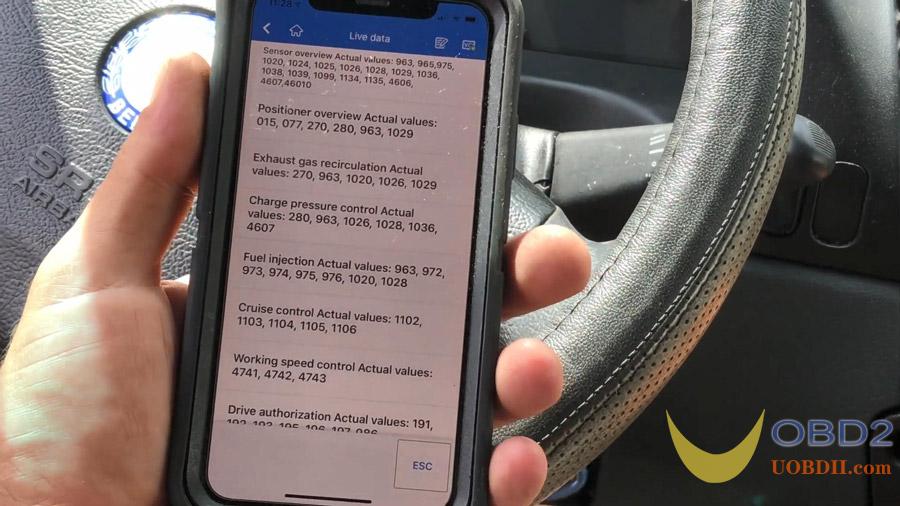 What else can we show you here, no engine light, we turn that off.

Okay so we talked about a few different meters, which one would you recommend to somebody who just bought a Sprinter and needs to diagnose it.

1).It’s easier than the other one (iCarsoft MBII etc).

2) It tells you right away what the problem with the code is, you don’t have to go in research what the codes mean like you do with the iCarsoft.

3). It’s a whole lot less expensive than iCarsoft. I believe 60 dollars (Autel AP200) will have this delivered to you from uobdii.com.

4)Connecting it to one vehicle with an APP on your phone or your tablet. It’s free or included if you want to use it for several vehicles, you can do that cost a little bit extra.

iCarsoft MBII is about 250USD – 300 USD. From what I’ve seen this does everything. For some similar tools, it will talk with the bigger computers, the dad and the gas. But for now everyday sprinter driver, Autel AP200 code scanner is all you need.