Hey, guys, we’ve got a couple of key fob here for 2006 Chevy Malibu, these two green ones have the original factory circuit boards in them and the two black ones are ones that just picked up for about twelve bucks and the circuit boards are a little bit different, so I hope that doesn’t cause a problem. Anyway I’m going to be going out to reprogram the car to work with these four key fob, but on this particular Malibu, you can’t program the key fob’s without some kind of scan tool, and since I don’t have the original GM factory tool which is the Tech 2. I’m gonna be using this Autel MaxiPRO MP808 instead, but before I go out and do that I want to check the batteries in these remote and my experience was programming key fob, one of the most important things through. 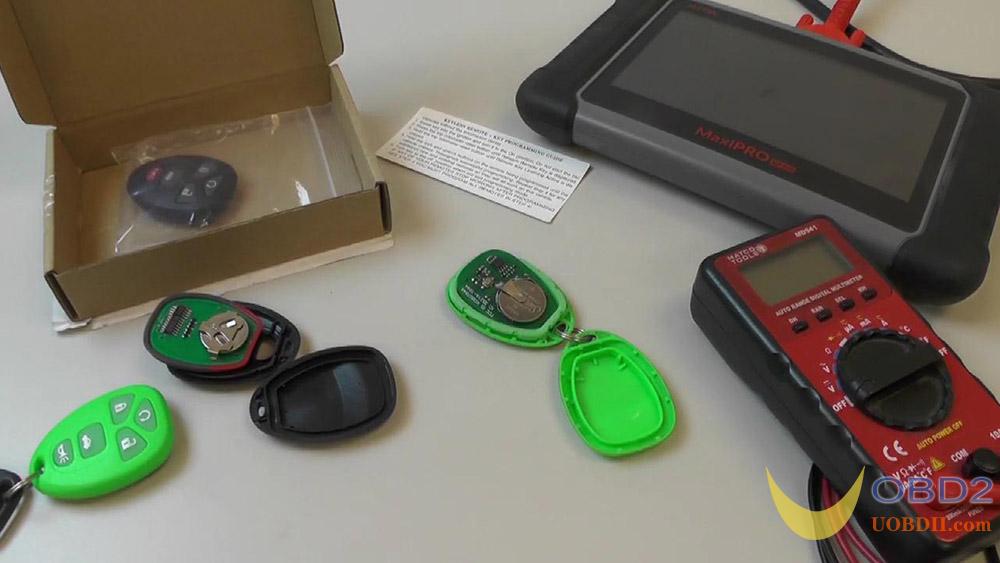 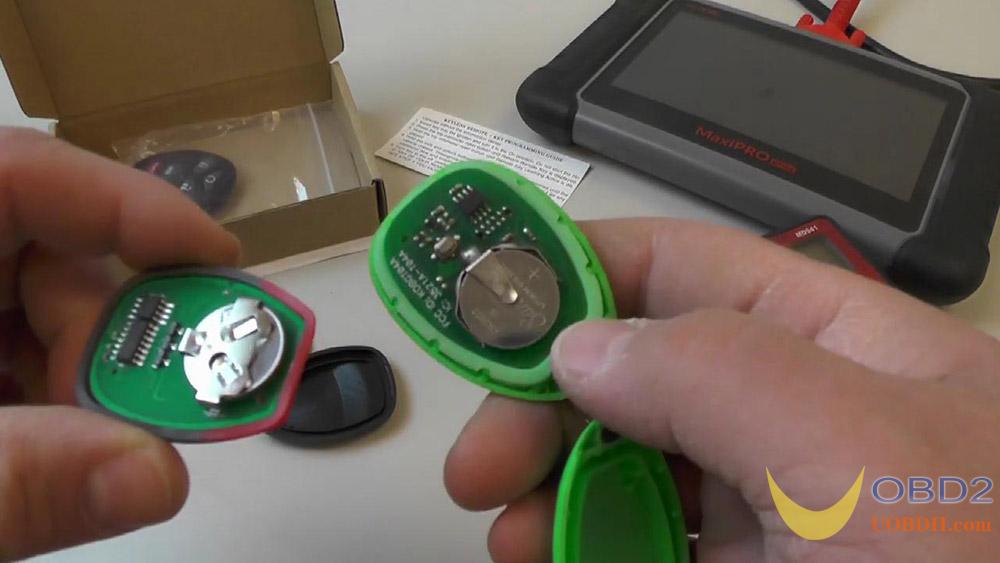 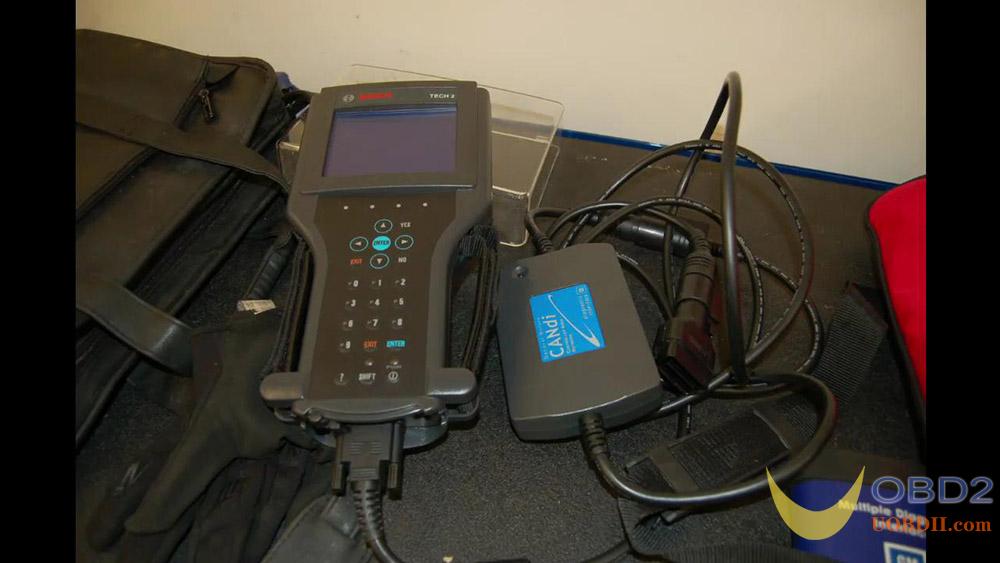 Learning process is to make sure that all the batteries are fully charged I definitely don’t want to have an issue during the programming process that might mess it up, but more importantly, I’m not going to be able to program the key fob at all, so really quick just gonna use my volt meter to check the battery and make sure they’re charged. 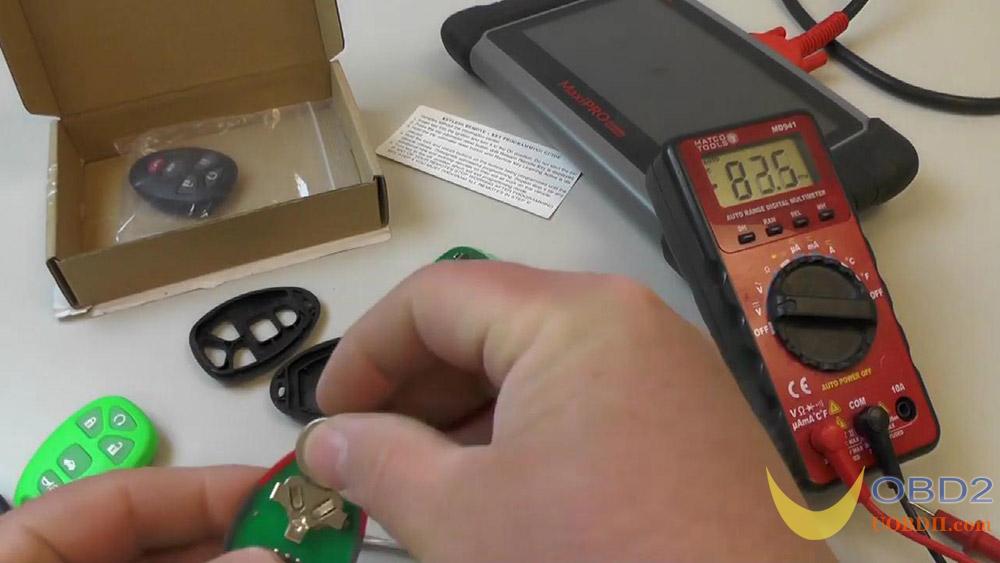 And there we go one that’s missing the battery, so I have to find a replacement and put it in there before we try to do this.

Okay there we go. 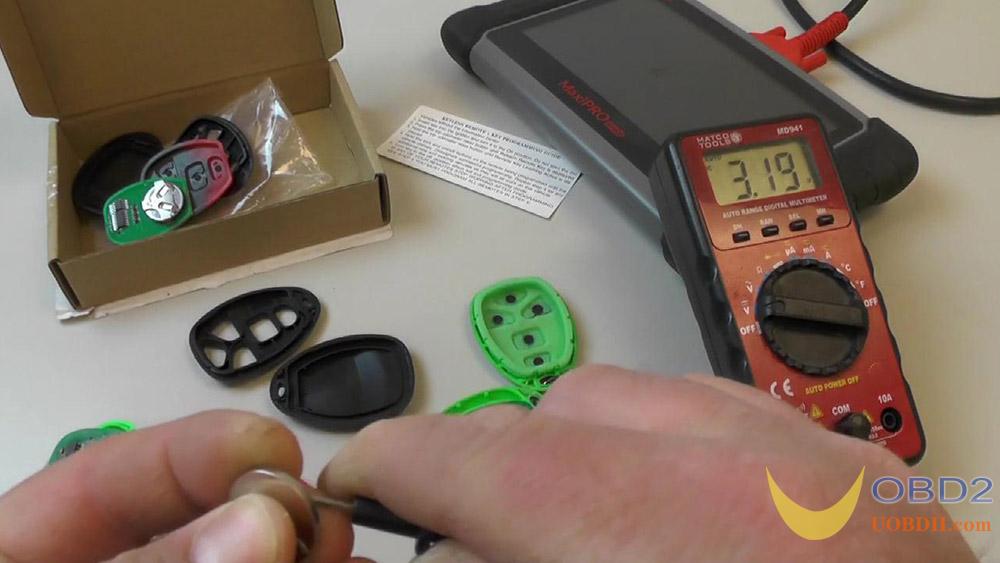 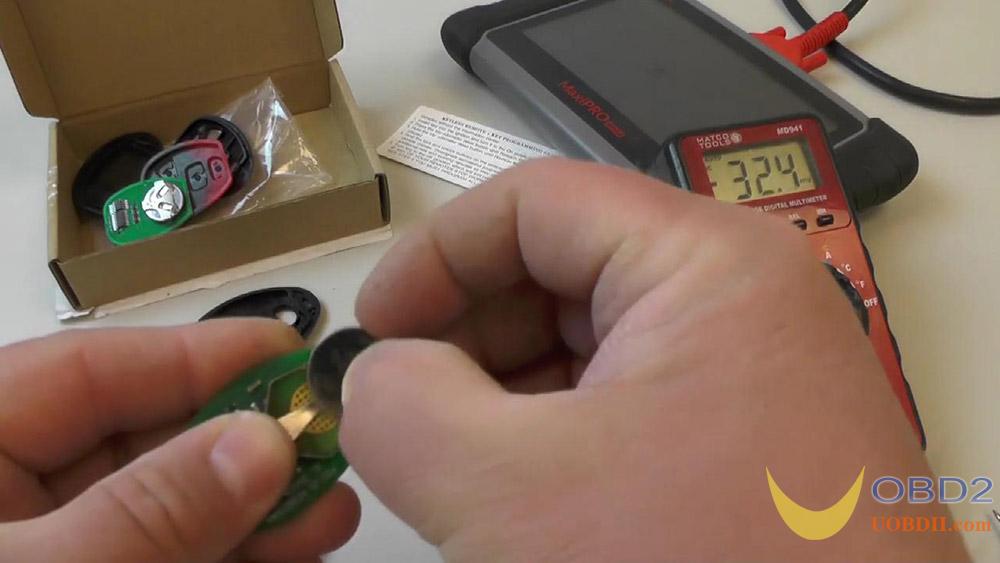 Pretty cool, now I can reassemble all these key fob and grab the scan tool and glass of the car to do the programming. 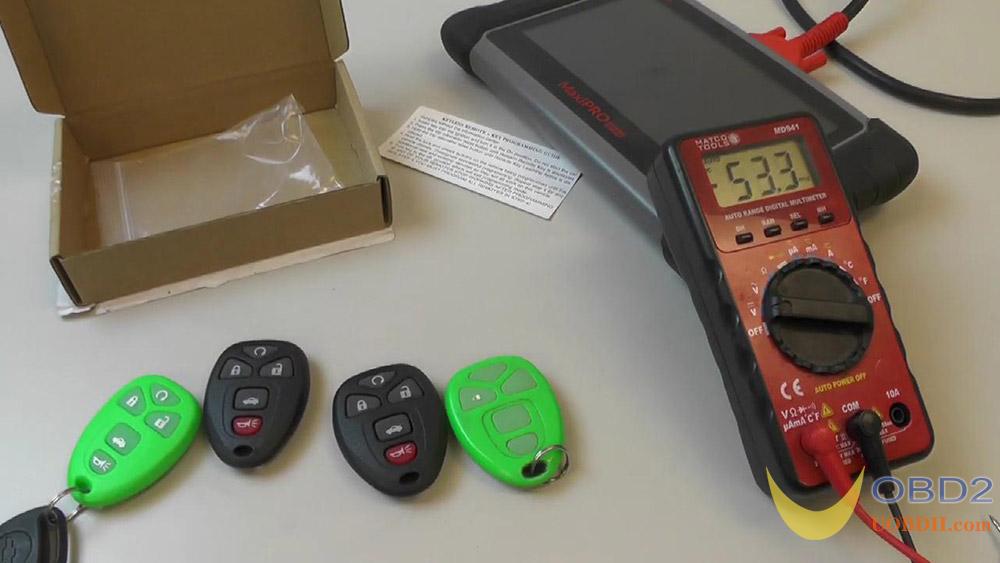 Pretty cool but let’s head out to the car, so first you gotta plug it in under the dash. 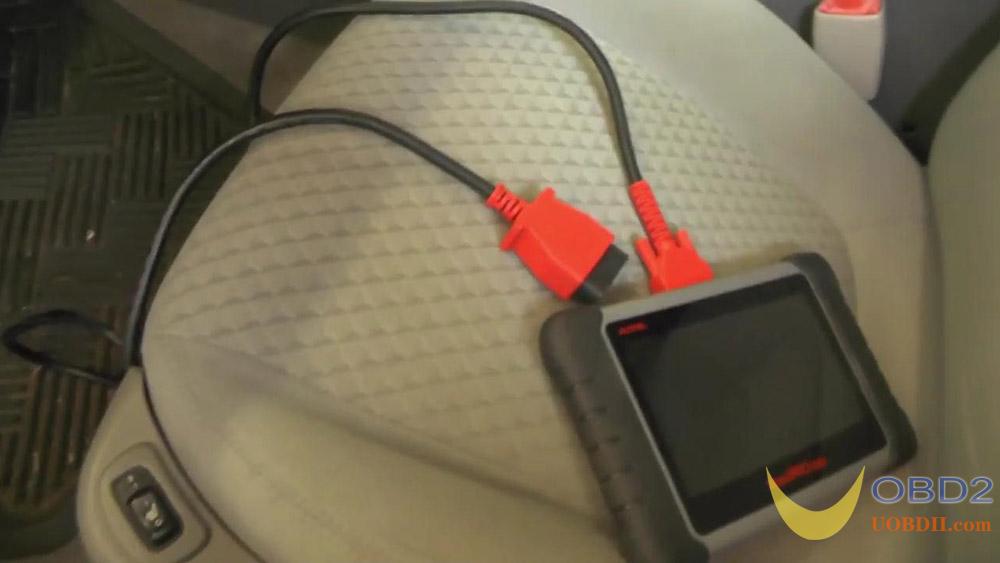 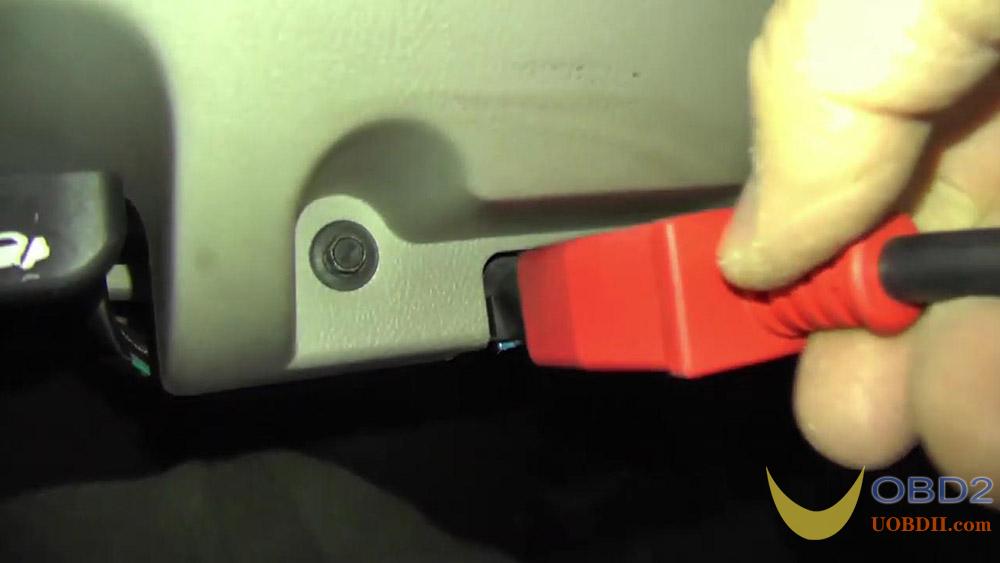 Okay so we’re all set up I had a scan tool Autel MaxiPRO MP808 connected to the BT connector under the dash board, put the ignition key in around and power up your Autel, let’s go into “Service” and I’m gonna pick the “Immo keys”, put into the vehicle “GM”. 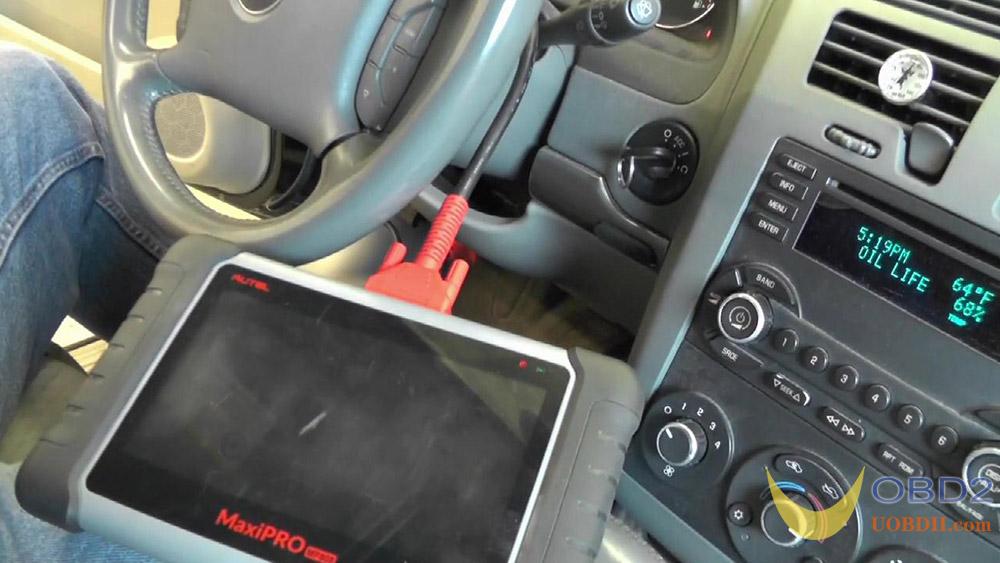 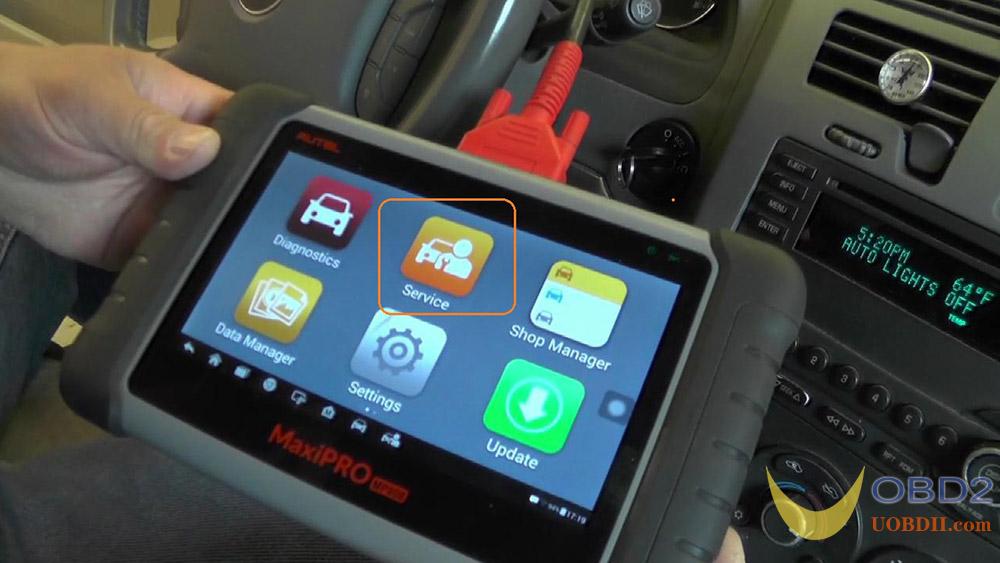 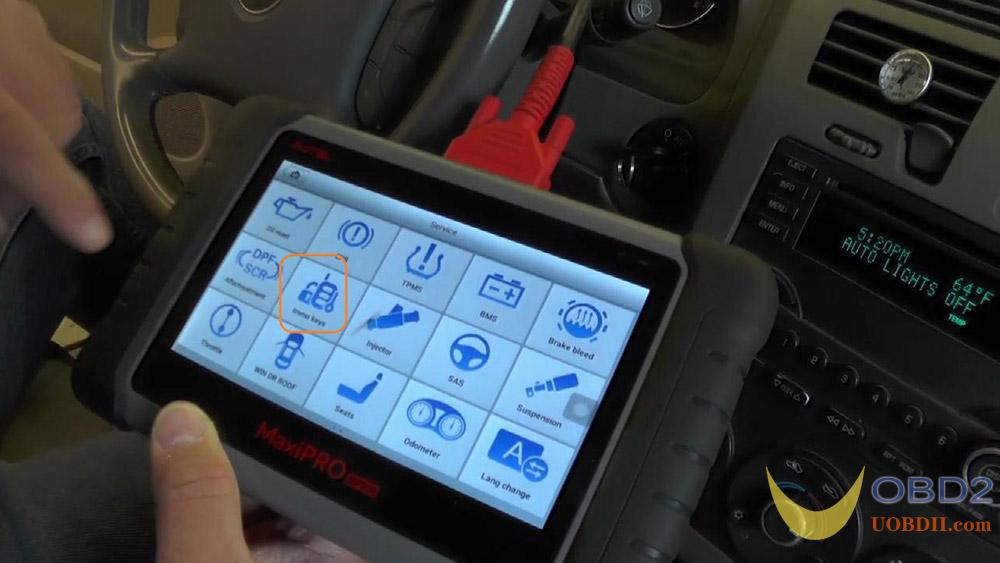 Try “Hot Functions”.
Let’s go into “Keyless Entry”, and it says here each time of five is programmed, you need to program all key fob to program press & hold lock and unlock buttons, when the tool indicates you will hear a single chirp from the instrument panel cluster when the key fob is programmed successfully proceed to the next key fob and repeat after hearing the turf, it takes five seconds to program each tea fob, turn the ignition on with engine off. 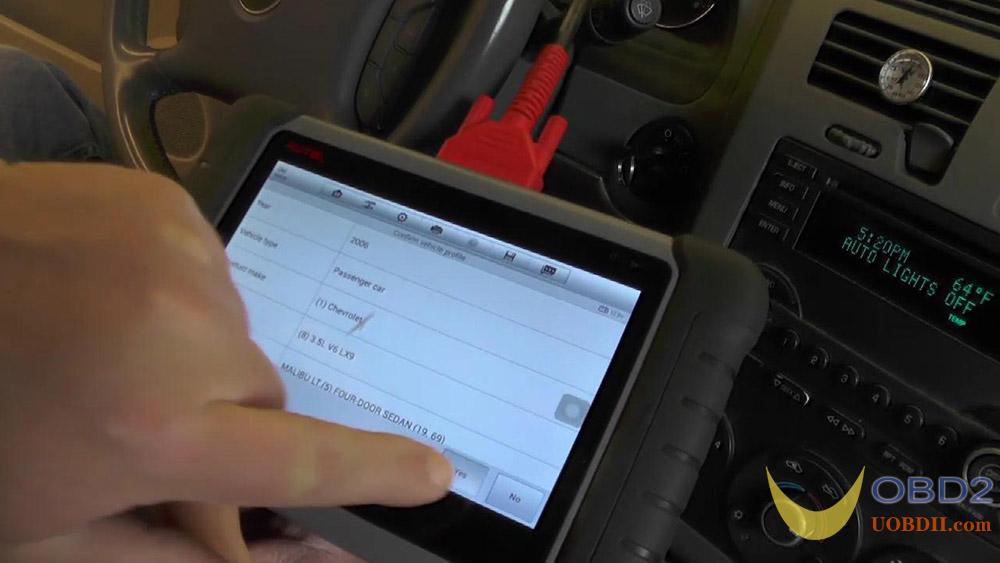 Simultaneously press lock and unlock on the key fob and keep them pressed now. 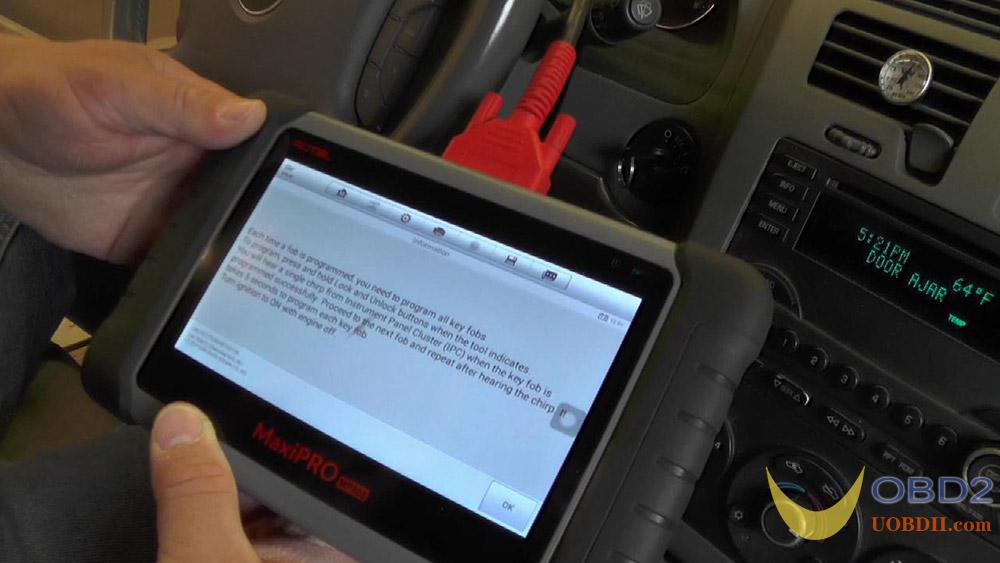 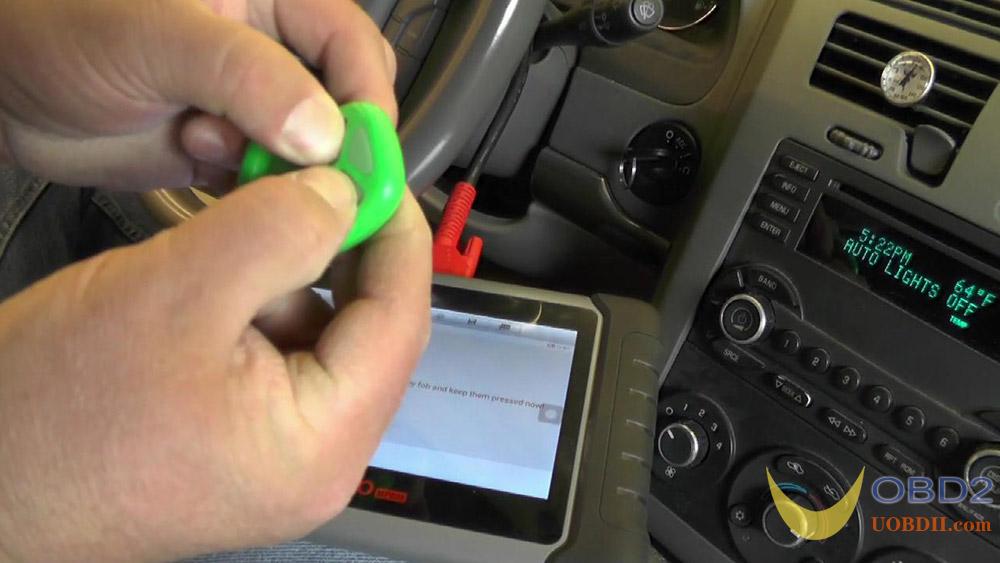 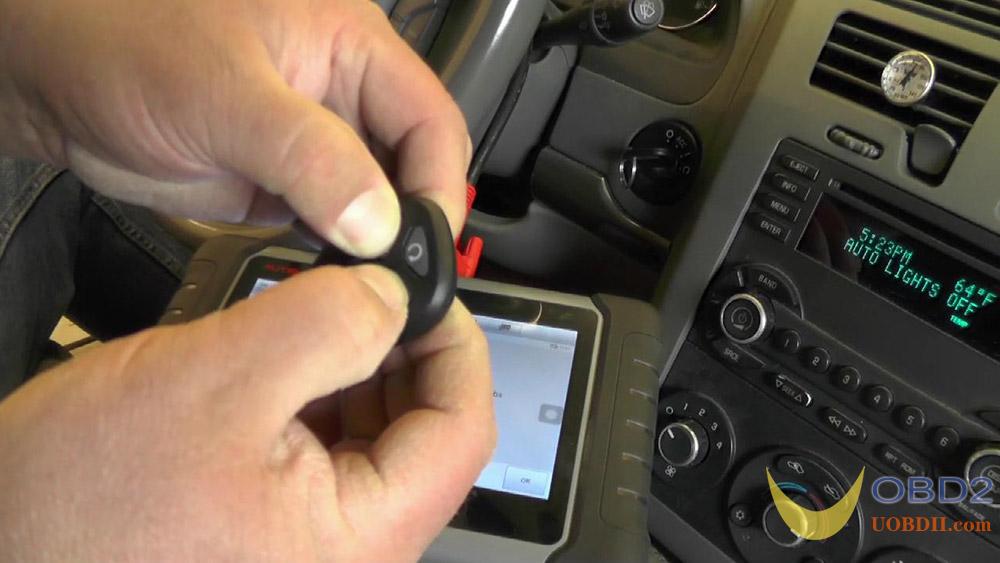 And that would be twice, which I think is because you’re only allowed to have four fobs program per vehicles, so that probably means, that’s it, no more fobs, so programming active.

Continue with remaining fob, press okay when completed and I guess that’s it, ok, that’s done. 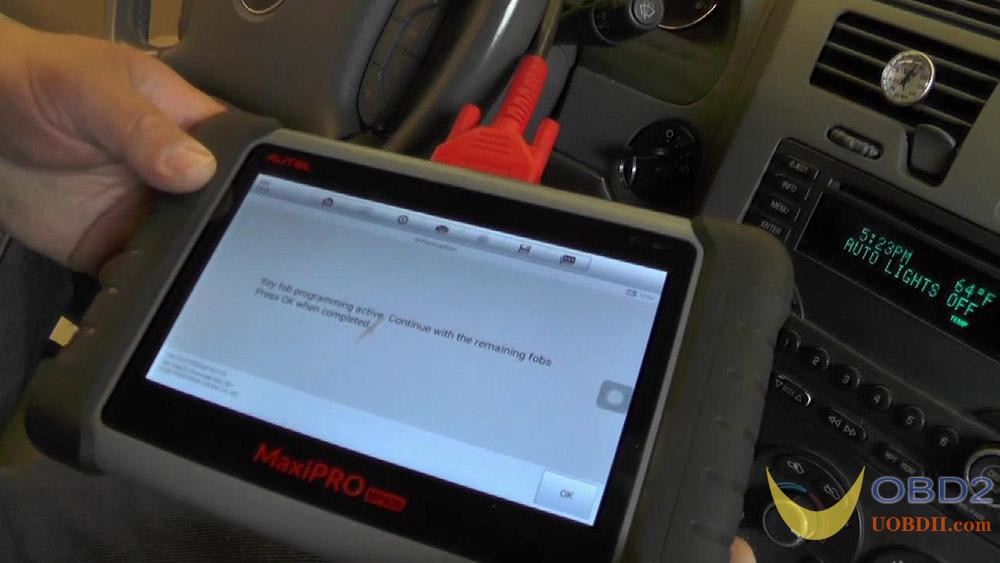 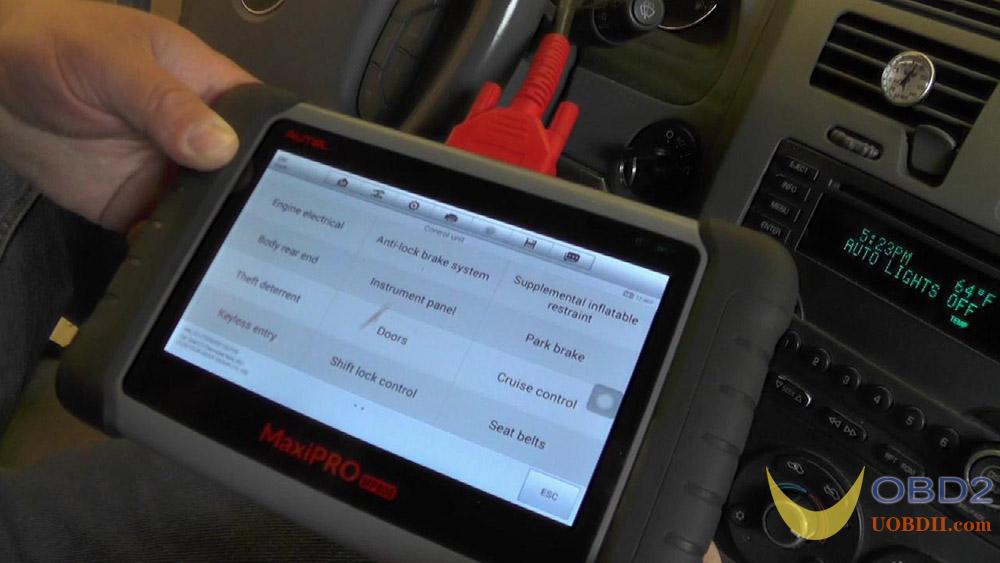 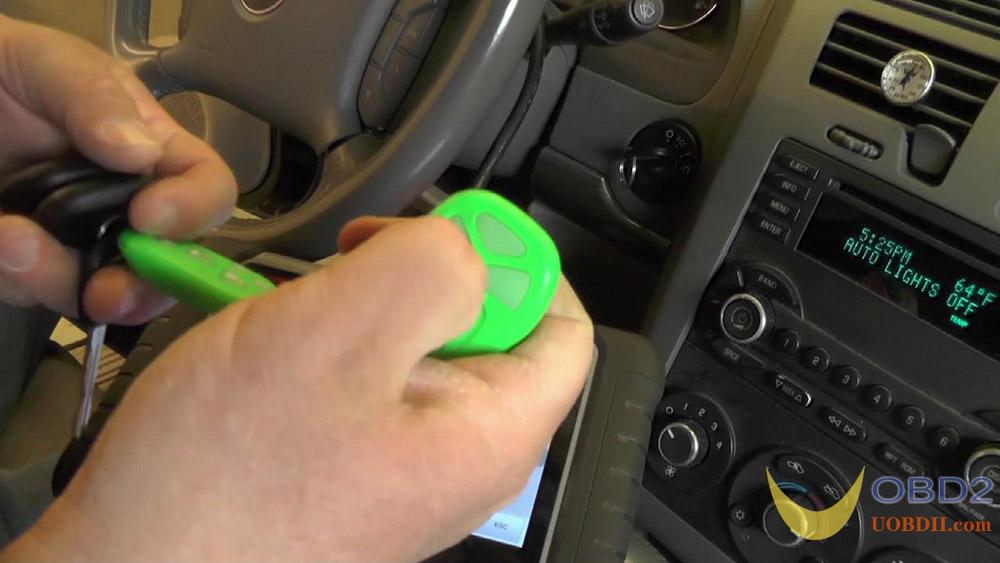 And the fobs lock and unlock. And finally ok, cool. 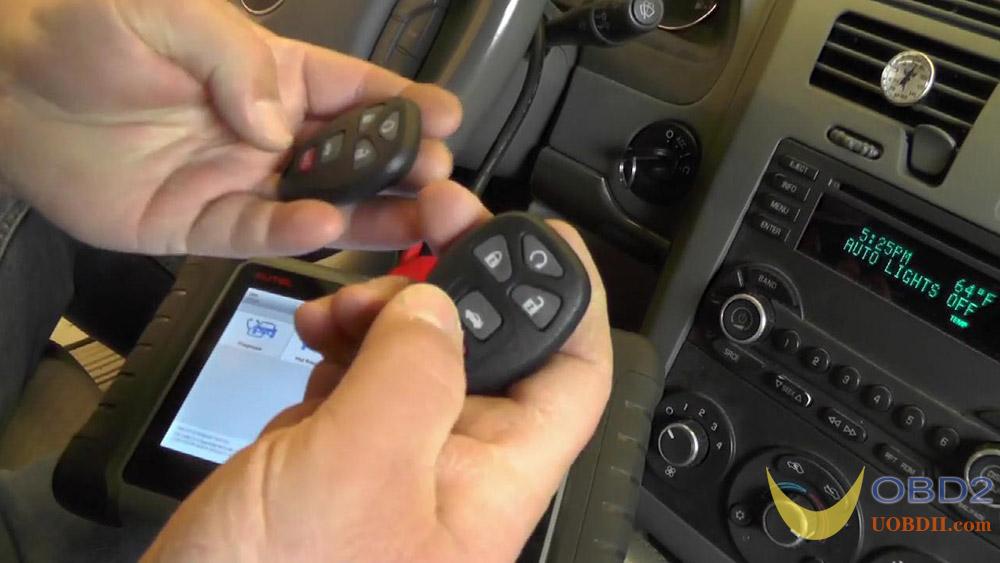 So there you have it programming key fob for 2006 Chevy Malibu, it’s too bad you can’t do this without using this Autel MaxiPRO MP808, but at least it can be done. So that’s pretty cool. 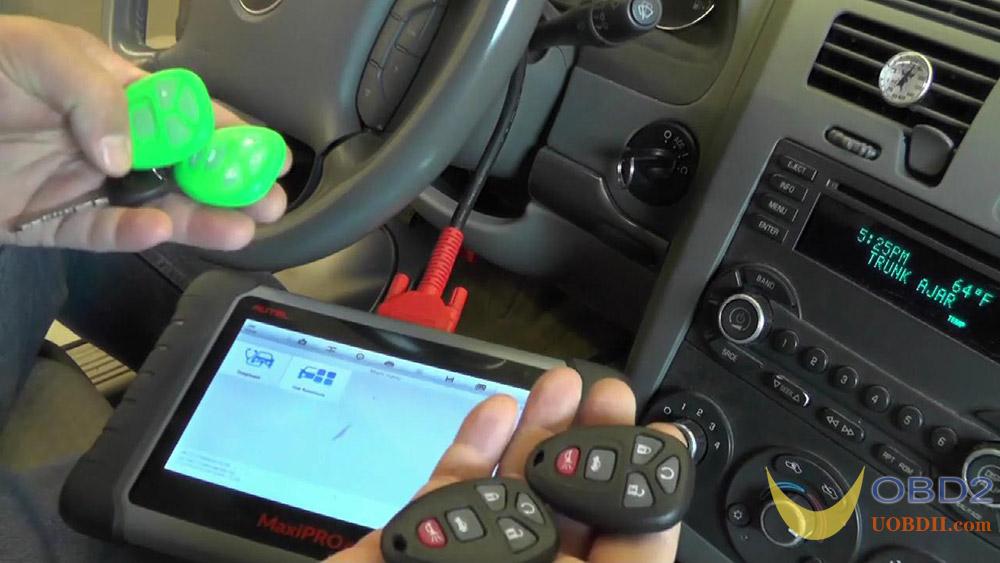