Autel PowerScan PS100 is really a hot sale device all around the world. Because of its high quality and powerful function, Autel PS100 becomes one of the best Circuit Tester. 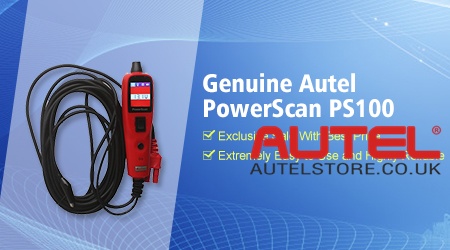 1.Is the PowerScan Probe Tester computer and air bag safe?

The tool LED and LCD pull no more than 1 milliamp of current,therefore when using it as a test light or multimeter it is computer and airbag safe. However, pressing the power switch is a different story. When you press the switch forward, you are conducting full battery current to the tip of the probe. There is a nice safety feature built into the tool. Simply connect the extra ground lead to the tool and press the power switch forward until it trips the circuit breaker.This will prevent power from going to the tip but still allow you to use the tool as a multimeter. When you are away from computer components, simple press the reset button and you are ready to power up again.

2. Why do I have no power at the tip when I am pressing the power switch forward but the red LED is on?

The power switch goes through a lot. It is one of the few things that go wrong with the tool.
The switch is a consumable that needs to be replaced on occasion. We have made it real simple to not only change it but also buy a new switch. The switch can be snapped out and replaced in seconds. You can buy switches from your Autel authorized tool supplier. The tool with the Rocker Switch slots makes it easy to replace a worn switch in the field without having to send it in for repair.

I have never been so impressed by such a reasonably priced tool. A friend of mine bought a similar “powered probe” device, and I was impressed. I bought this one because the point oscilloscope feature seemed useful. I made the right call.
This thing is unbelievably helpful for any sort of automotive electronic testing. Need to
figure out why a light isn’t on? Put 12v to the bulb holder and check it. Need to see if a
switch is working? Point this at the back of it, and flip the switch. Need to figure out why a
trailer light isn’t working? This thing has a wicked long cable extension to reach way back to the trailer. Need to troubleshoot a wiring loom under the car? Not only will this do the job,
but it has a decent LED light. Seriously, buy this PowerScan PS100 tool. It comes in a nice case, with the pieces you need. It pays for itself before the mechanic has even diagnosed the problem, and will help you figure out if your weird jury-rigged solution will work before you put everything back together. I feel like I should write the engineers a check because I’ve gotten so much use out of it.

I am an automotive tech by trade and bought this to use in troubleshooting electrical shorts
in automobiles. I have used the power probe in the past but the Autel has one particular
feature I was interested in. This has a kinda scope feature that can really be useful when
troubleshooting sensors on the fly along with a very bright and easy to read screen as well as a ohm meter it had me curious as to how good it is. So far it has been very useful and works well, I don’t need a separate meter for certain testing and it has been accurate in testing. I did find a strange operation about it though. When probing a circuit that lets say has ground to it then when activated goes hot , the PS100 shows the circuit go to hot (12volt) but also shows ground as well. Pretty strange but idk if it made to do so. The tool itself seems well built but the cable to me seems a little thin and not as thick if a gauge as the power probe. All in all I think it’s a great tool for the features and price point, I only hope it lasts just as long as I expect or will it fail too soon. I will update in the future as to its
durability and operation.